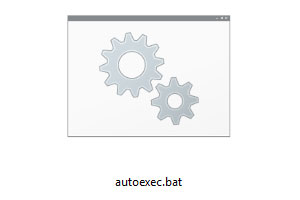 How to edit the files

If you have Windows 95, Windows 98, or Windows ME, we recommend you use the sysedit command. To run sysedit, click Start, Run, and type sysedit.

Windows XP and later no longer use the autoexec.bat or config.sys file.

Remarking lines in the autoexec.bat or the config.sys allows you to temporarily or permanently prevent a line from loading each time you boot the computer. To remark a line, type REM in front of each line you want to skip.

If you get errors with an autoexec.bat line, remark the line instead of removing the line, in case it needs to be added again.

The following commands help your computer load programs into memory more efficiently, allowing you to have more memory for MS-DOS programs and games.

Make sure you have the three lines below at the beginning of your config.sys file.

Load all your devices in the config.sys and autoexec.bat into high memory.

Below is an example of how the autoexec.bat may look.

The following is some of the more common lines found in the autoexec.bat and further information about each of the lines.

Tells MS-DOS to read the lines but not echo them or their results back to the screen.

The set sound is telling the computer to send all sound events that the computer may run to that directory containing the sound drivers.

Tells the computer to set the Sound Blaster settings, which is a good line for computer games or other programs needing sound. If you have this line in your autoexec.bat, you have all settings for your sound card. A220 is a port address of 220, I5 is IRQ 5, and D1 is DMA 1. These settings are the typical settings for most sound cards.

Sets the computer path to look in the C:\Windows directory or the root if a command used at the prompt is not found.

A line used to load the CD-ROM into the high memory area. If you have Windows 95+, the MSCDEX is in the C:\Windows\COMMAND directory. In Windows 3.x or DOS, this file is in either in C:\DOS or C:\Windows directory. The /D:123 is the name of the driver name that loads in upper memory; this can be anything, usually /D:MSCD0001. Keep in mind that this is not the driver, it is the name of the driver. If you change this line, it needs to also be changed in the config.sys on your CD-ROM line. If the two are not the same, your CD-ROM drive will not load.

Loads the mouse driver into high memory. However, not all mice use the same drivers. Although the mouse may use mouse.exe, it could also be "mouse.com" or "mouse.sys," loaded in the config.sys.

Loads the smartdrive disk cache utility into memory. See the smartdrv command page for additional information about this utility.

Load doskey into memory so it can be accessed from the command line.

Used for users using Windows 3.x, this line loads automatically Windows when booting the computer. Without this command the computer would only load to the MS-DOS prompt.

Below is an example of how the config.sys may look.

The following is some of the more common lines found in the config.sys file and further information about each of the lines.

The himem.sys line is an important line; this line allows you to load drivers into high memory area. If this line is not present, Windows 3.x will not load.

Load DOS into high memory in an upper memory block.

This line should be placed after the himem.sys.

The files line allow Windows to load 30 files at the same time. However, going higher may decrease the computer's performance; 30 is found to work the best. Also, make sure the line is one line and that there's not a space between and after the = (equal sign).

The stacks line was first used in MS-DOS 3.2 and was used to swap the stack whenever an asynchronous hardware interrupt occurred. Later in MS-DOS 3.3 the line STACKS=0,0 was added into the config.sys. In special circumstances, this line was changed to STACKS=9,128.

The STACKS statement has a range of 8-64, 32-512. If a higher value is entered, you will receive a "FATAL: Internal stack failure, system halted error."

Buffers line is to load buffers into memory allowing Windows to load memory.

The ansi.sys line is a driver for DOS to allow you to have different colors and sizes and special characters at the DOS prompt.

The CD-ROM drivers for the CD-ROM drive. The /D:123 represents the name of the driver, which is named 123, however, can be named anything, usually MSCD0001. However, keep in mind that the /D:123 must be the same in config.sys and autoexec.bat. If they are different, the CD-ROM will not work in MS-DOS.

Allows you to specify the last drive installed on the computer. It is not recommended this line be used unless you are using Windows 3.11 or earlier since later version of Windows ignore this line.

A line used to specify the number of file control blocks for file sharing. Should only be used when programs require it, and today, is not used or required. FCBS can utilize between 1 and 255.