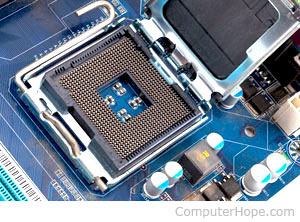 The processor can be an important consideration for users who are building a computer. Today, there are three main processor manufacturers: AMD, Cyrix, and Intel. Each of these companies have good and bad reviews, and really each of them are very close in compatibility and reliability. When considering any of these processors verify the motherboard is compatible. For example, if an Intel motherboard is purchased or currently installed into the computer, purchase an Intel Processor, an AMD processor only works on a motherboard designed for AMD.

It is highly recommended that all processors have a heat sink. The heat sink helps to allow for the processor to remain cool and therefore run more efficiently. A computer processor with a missing, bad or failing heat sink can cause the computer to lock up, cause errors or encounter other issues.

When looking at a processor, also consider the heat sink that will be attached to that processor and ensure that the processor being purchased is compatible with that heat sink.

Additional information about computer heat sinks is on our heat sink page.

Today, there is a wide availability of interfaces the CPU may connect to. Below is a listing of each of the interfaces and a brief description on each of them.

The slot was first used and introduced by Intel when they released the Pentium II processors. This slot was designed to allow users to install the processor into the computer. However, because of the additional cost considerations, Intel has now gone back to the Socket what is now known as the FC-PGA socket. Computers that have the Slot are the Intel Pentium II and early versions of the Intel Pentium III.

The AMD processors use the Slot A interface

The names of the processors can be very confusing and are used as a method of helping to sell a computer or computer processor. Below is a listing of some of the more commonly used names and a brief description on each of them.

AMD K6-2 - Socket 7 processor with the 3DNow! technology and first to have the 100MHz bus.
AMD K6-3 - K6-2 chip with Level 2 cache memory that runs at the speed of the CPU.
AMD Duron - Like the Intel Celeron, the AMD Duron is an affordable solution processor allowing for the price in the overall computer to drop.
AMD Athlon - AMD generation with features such as the 200 MHz bus speed
AMD Thunderbird - The latest AMD processor, this processor is the socket version.

When looking at the speed of processors available, we highly recommend that you do not purchase or consider purchasing a processor that has just been released. The price of the processor will be at a premium price and if you give that processor 2-4 months it will drop in price dramatically.

Additional help and information about installing a computer processor and other computer hardware can be found through our Installation section.