IBM announces it will no longer be using vacuum tubes and releases its first computer that had 2000 transistors.

The first optical scanner is created by engineer Russell Kirsch at the United States National Bureau of Standards. Pictured at right is Kirsch in 2007, holding a printout of the 176 x 176-pixel image of his infant son, sixty years later.

Russia launched the first artificial satellite, named Sputnik, on October 4, 1957. The satellite is the first space satellite and sends a signal from space that could be heard on Earth.

Other computer events in 1957

The first Fortran compiler was released in 1957.

The Russian satellite Sputnik runs out of batteries on October 26, 1957, and stops transmitting its steady beep.

In response to Sputnik, the United States creates the new agency ARPA.

Casio was established in 1957.

Digital Equipment Corporation was founded by Kenneth Olsen in 1957. The company will later become a major network computer manufacturer.

Nathaniel Borenstein was born on September 23, 1957.

Stuart Moulthrop was born in 1957. 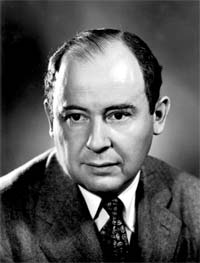