How to enter the BIOS or CMOS setup

Because of the wide variety of computer and BIOS manufacturers over the evolution of computers, there are many ways to enter the BIOS or CMOS setup. Below is a listing of most of these methods, as well as other recommendations for entering the BIOS setup.

Apple (Mac) utilize an EFI, which doesn't need to modify based on the hardware in the computer, like a BIOS. The EFI provides better integration between hardware and software for Apple computers, virtually eliminating the need for a BIOS.

This document doesn't help if you cannot enter the CMOS setup because it is password-protected. See: How to clear an unknown BIOS or CMOS password.

Computers manufactured in the last few years allow you to enter the BIOS setup using one of the five keys shown below during the boot process.

* If pressing F2 opens a diagnostics tool, your setup key is likely F10

Setup keys are to be pressed as the computer is booting up. Most users see a message similar to the example below upon startup. Some older computers may also display a flashing block to indicate when to press the F1 or F2 keys.

If you're unsure of what key to press, as the computer boots try pressing and holding one or more keys on the keyboard to cause a stuck key error. Once you get this error, the option to continue or enter setup should appear.

If you are still unable to enter the BIOS using the methods listed above, check the motherboard's manual for the appropriate key to enter BIOS. Documentation for the motherboard may also be on the manufacturer's website.

Once you have successfully entered the CMOS setup, a screen similar to the example below appears. Your CMOS setup may look different, depending on the manufacturer, but should still share a lot of the same options and information. 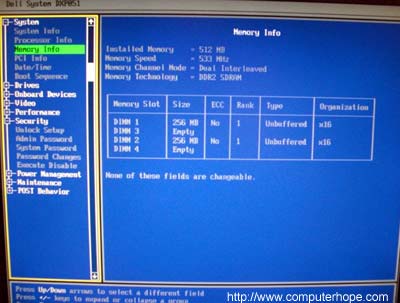 How do I change and save changes in CMOS setup?

Once in CMOS setup, the method for changing the settings often depends on the BIOS manufacturer. You may use the arrow keys along with the Enter key to select categories and change their values. Some manufacturers may have you press the Page up and Page down keys to change the values.

All manufacturers show which keys navigate on the bottom or right side of the screen.

If you're trying to change the clock, speed, or other settings and don't have the option available, it's because the motherboard doesn't support it. If you believe it should be supported, you may need a BIOS update.

How do I save the changes?

If any changes are made, you need to save those changes, which is usually done by pressing the F10 key on the keyboard. If F10 doesn't work, look at the bottom or top of the screen for the key that is used to save the settings.

If your Acer computer cannot boot or you want to restore the BIOS to its original settings, press and hold the F10 key as you turn on the computer. While continuing to hold the F10 key, two beeps should be heard indicating that the settings are restored.

Older AMI BIOS could be restored to bootable settings by pressing and holding the Insert key as the computer is booting.

Some early IBM computers require you to press and hold both mouse buttons as the computer boots to enter the BIOS setup.

Finally, if none of the above suggestions allow access to your CMOS setup, try generating a stuck key error, which gives an option to enter the CMOS setup. To do this, press and hold any key on the keyboard and do not let go (you may get several beeps as you are doing this). Keep pressing the key until the computer stops booting, and you have the option to enter setup. If this does not work make sure your keyboard is working.