What to do with an old computer

Often, people who purchase a new computer will wonder what to do with their older computer, or if they should throw it away. Below are recommendations of what you can do with your older computer.

Use the computer for other things

Many people think once they get a new computer their old computer automatically becomes obsolete and can't be used for anything else. Surprisingly, you can do a lot with that old computer:

Give to kids or relatives

Most kids would love a computer in their room, even if it's an older computer. See if any of your kids would like to have the families old computer for their computer. If you decide to allow Internet access on that computer make sure to protect that child while online.

See if any of your family relatives would like to have your computer. Setting up a family member such as a grandparent with a computer especially one who has never had a computer can make a huge difference in their life.

Use it for spare parts or cannibalize it

Open the computer and take any spare parts you think you need for your new computer. Things you may want to keep include: fans, power supply, CD-ROM, floppy drive, hard drives, and memory.

The parts mentioned above can be kept as a backup in case parts of your new computer fail. Or, components like a CD-ROM, hard drive, or memory can be added to your new computer to give it additional capabilities.

Selling a computer can seem like more work than getting rid of it, but it helps you recoup some money that you can spend on your new computer. It might also be useful for someone who doesn't need to purchase a new computer. And, finding a new home for a computer is good for the environment. Computers contain many precious resources, such as gold, silver, platinum, and palladium, which can be harmful for the environment if discarded improperly. So, there are many great reasons to find a new home for your old computer. For tips and recommendations about selling your computer online, see our online auction site guide.

Several places that accept working computers as donations to be used for the less fortunate, schools, etc. If you are interested in donating your computer, see the computer disposal page. 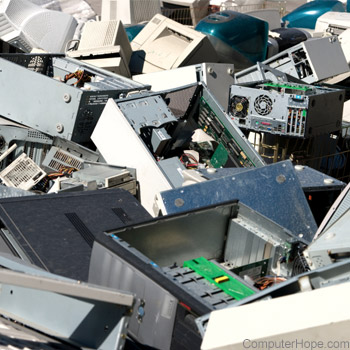 If your computer is so old that no one would accept it as a donation, recycle it and don't throw it away. A list of places capable of recycling computers and computer peripherals is found on the computer disposal page or by searching in your favorite search engine.