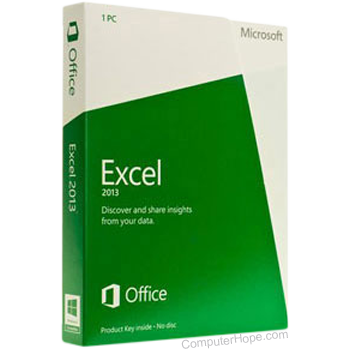 Formulas are what helped make spreadsheets so popular. By creating formulas, you can perform quick calculations even if the information changes in the cells relating to the formula. For example, you could have a total cell that adds all values in a column.

Below is an animated visual example of how an excel formula can be inserted into a spreadsheet. In our first formula entered into the cell "D1," we manually enter a =sum formula to add 1+2 (in cells A1 and B2) to get the total of "3." With the next example, we use the mouse to highlight cells A2 to D2 and then click the formula button in Excel to automatically create the formula. Next, we show how you can manually enter a formula, and then using a mouse, get the cell values (you can also highlight multiple cells to create a range). Finally, we manually enter a times ( * ) formula using the sum function to find the value of 5 * 100.

The examples below are listed in alphabetical order. If you want to start with the most common formula, we suggest starting with the =SUM formula.

An = (equals) creates a cell equal to another. For example, if you were to enter =A1 in B1, whatever value was in A1 would automatically be placed in B1. You could also create a formula that would make one cell equal to more than one value. For example, if cell A1 had a first name and cell B1 had a last name, you could enter =A1&" "&B1, which combines A1 with B1, with a space between each value. You can also use a concatenate formula to combine cell values.

Display the average amount between cells. For example, if you wanted to get the average for cells A1 to A30, you would type =AVERAGE(A1:A30).

Count the number of cells in a range containing only numbers. For example, you could find how many cells between A1 and A15 contain a numeric value using the =COUNT(A1:A15). If only cell A1 and A5 contained numbers, the cell containing this function would display "2" as its value.

The syntax of the IF statement is =IF(CELL="VALUE","PRINT OR DO THIS","ELSE PRINT OR DO THIS"). For example, the formula =IF(A1="","BLANK","NOT BLANK") makes any cell besides A1 display the text "BLANK" if A1 has nothing in it. If A1 is not empty, the cells display the text "NOT BLANK". The IF statement has more complex uses, but can generally be reduced to the structure above.

Using IF can also be useful when you may want to calculate values in a cell, but only if those cells contain values. For example, you may be dividing the values between two cells. However, if there is nothing in the cells, you would get the #DIV/0! error. Using the IF statement, you can only calculate a cell if it contains a value. For example, if you only wanted to perform a divide function if A1 contains a value, type =IF(A1="","",SUM(B1/A1)), which only divides cell B1 by A1 if A1 contains a value. Otherwise, the cell is left blank.

Returns a reference specified by a text string. In the example above, the formula would return the value contained in cell A2.

Returns the value of a random cell between A1 and A10 using the indirect and randbetween (explained below) functions.

Generates a random number greater than zero, but less than one. For example, "0.681359187" could be a randomly generated number placed in the formula's cell.

The most commonly used function to add, subtract, multiple, or divide values in cells. Below are different examples of this function.

Add cells A1 through A5.

Subtracts cell A1 from A2.

Multiplies cells A1 and A2.

Perform the SUM function only if there is a specified value in the first selected cells. An example of this would be =SUMIF(A1:A6,"TEST",B1:B6), which only adds the values B1:B6 if the word "test" was entered somewhere between A1:A6. So if you entered "test" (not case sensitive) in A1, but had numbers in B1 through B6, it would only add the value in B1 because "test" is in A1.

Would print out the current date in the cell containing the formula. The value changes each time you open your spreadsheet to reflect the current date and time. If you want to enter a date that doesn't change, press Ctrl and ; (semicolon) to enter the date.

The trim formula lets you remove any unnecessary spaces at the beginning or end of a value in a cell.

The lookup, hlookup, or vlookup formula lets you search and find related values for returned results. See our lookup definition for more information about this formula.