How to record keys typed into a computer

The practice of recording keystrokes on a computer, known as keylogging, has existed since at least 1983. In can be done for good reasons, but also for bad reasons as well.

The act of keylogging is many times associated with viruses and spyware programs. These types of programs log keystrokes in hopes of capturing personal and confidential information, such as social security numbers and account passwords.

Some reasons for keylogging are good, too. Schools and law enforcement are known to perform this action to protect their students and citizens, and enforce laws and regulations. Parents may want to know what they're kids are saying or if they're doing anything they're not supposed to be doing on their computer.

Unless you're a legal guardian or an employer, using keylogging against someone (even a spouse) may be illegal.

Whatever the reason is, keylogging is done through the use of hardware or software on a computer. 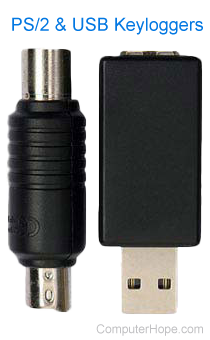 Keylogging hardware may take the form of either firmware run at the BIOS level or a device connected between a computer's keyboard and the computer itself.

At the BIOS level, the firmware records the keystrokes after they reach the computer.

At the keyboard device level, the keystrokes are recorded before they even reach the computer. Some of these devices can even be built into the keyboard, making it difficult to find or detect. The picture is an example of a PS/2 and USB keylogger that can be attached between the keyboard and the computer.

More recently, there are devices that can detect keystrokes from wireless keyboards. These devices collect ("sniff") the data sent between the keyboard and the receiver.

Keylogging software comes in multiple flavors, including the virus and spyware kind, and software designed to legally collect keystrokes.

Viruses and spyware employ tactics that make it difficult to detect and stop from occurring. The program resides at levels in the operating system where users are completely unaware of the actions happening in the background. However, most malware and virus detection programs can detect many of these programs.

There are other software-based approaches to keylogging. They include parental control software, and programs that log instant messenger chat, web page forms, and school & law enforcement subjects.

For the general user, parental control programs are sometimes the most commonly used software to perform keylogging.