How to tell the temperature of a video card

If you're concerned the video card in your computer is running too hot, follow these steps to measure its temperature.

Video cards are designed to be able to run quite hot. Many video cards run at temperatures in the 60 to 70 degree Celsius range, and this is normal. Some higher-end video cards can run cooler, due to a more powerful cooling fan or other cooling mechanisms, but most video cards have a basic heat sink to remove heat.

In most cases, there is no real need to be concerned about the temperature of the video card. However, if your video card does manage to get above 100 degrees Celsius in temperature, find a better way to keep it cooler or consider having it replaced. However, anything under 100 C is okay. If it consistently stays over 100 C, consider replacing the card to avoid computer damage or the possibility of it starting a fire.

Excess dust build up and lack of proper airflow in the computer case can cause heat issues. For further help, see: Should my computer fans be sucking or blowing?

Some models of NVIDIA GPU provide temperature information that is automatically displayed in the NVIDIA Control Panel.

For other video cards, there are many different third-party temperature monitoring software available that are capable of displaying the video card or GPU temperature. Usually, these programs monitor other hardware as well, to provide a full picture of how your computer is doing (like a health check). In the picture below, is an example of CPUID HWMonitor a free to use utility for monitoring all temperatures of the computer. 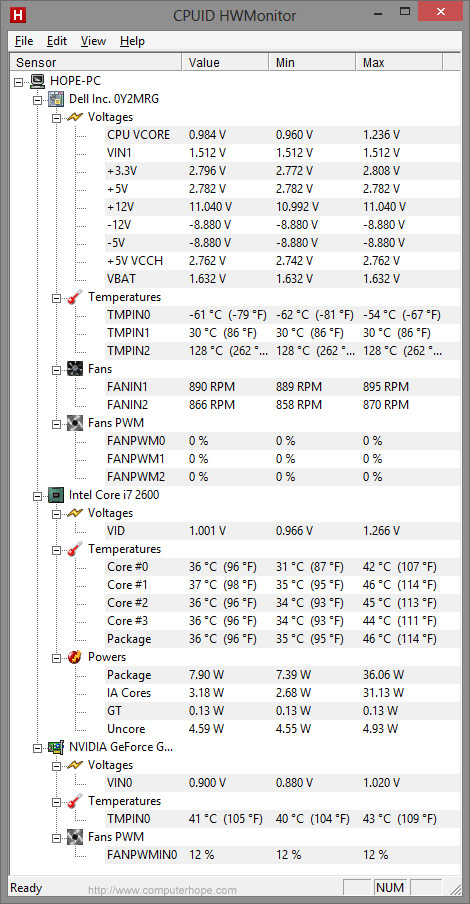 The following devices and appliances helps you measure the precise temperature of your GPU.

On the hardware side, you can install a temperature probe which attaches to the video card directly. The other end of the probe attaches to a digital display console, which usually fits into a 3.5" or 5.25" drive bay. This console displays the temperature of the video card. These probes can also be used on computer processors, and some higher-end probes feature multiple probes for monitoring more than one device at a time. For example, with enough probes, you could monitor the video card, processor, memory, and hard drive. The picture shows the Aero Cool Touch-2100, which is capable of monitoring up to five different devices and adjusting the speeds of five different fans.