How to install and use Git on Windows 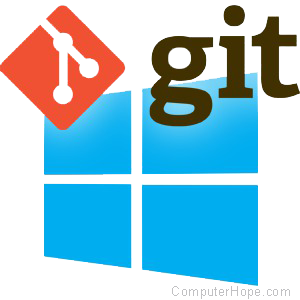 By default, Git is installed on Linux and macOS computers as a command line option. However, Microsoft Windows does not include a Git command. Below are the steps on how to install and use Git and GitHub on Microsoft Windows. 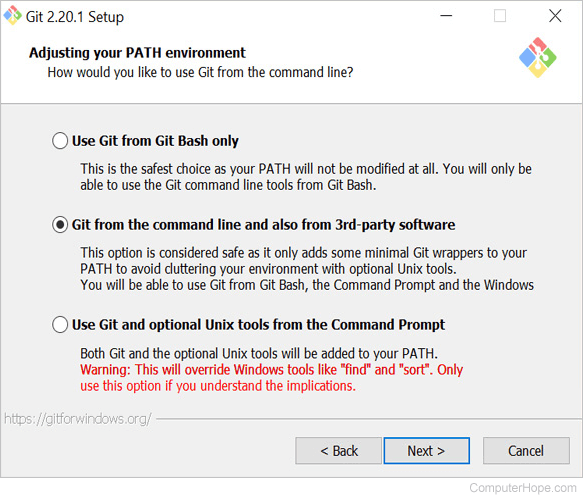 Configuring and connecting to a remote repository

Running each of the above commands give you an output similar to what is shown in our example below. 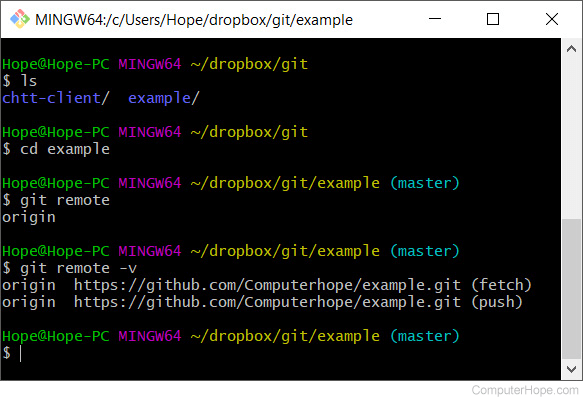 Now that you've connected to a remote repository on GitHub you're ready to start working on the files and pushing and pulling files as you update the files.

Working in your local repository and pushing files

After following the above steps and cloning a remote repository, you can work on the files as you normally would. You can create new files or edit existing files from the command line or your favorite text editor. Below, are the steps of creating a new file, pushing that file, editing an existing file, and pushing the update.

Creating a new file and pushing to remote repository 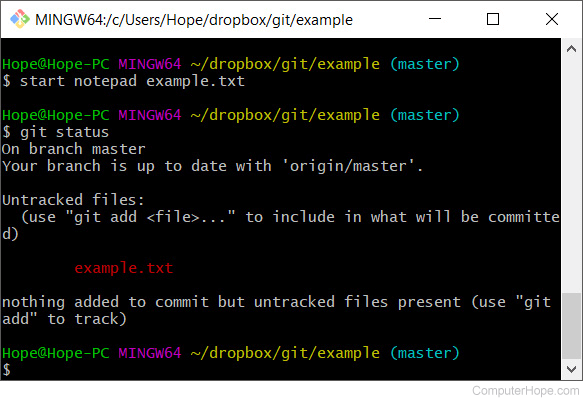 You can also type git commit with no additional tags or options. However, when doing this it opens a vim like editor that can be difficult for those not familiar with the vim to use. If you type this command press "i" to enter insert mode and type the notes for the commit on the first line, press Esc, and then type ":wq" to save, exit, and commit. We suggest using the above command because it's easier for more people to use.

If you want to follow the progress, you can type git status again to see the current status. You can also type git log to see a log of changes.

You'll be asked for your GitHub username and password if your computer has not logged in to Git from the command line.

Once the file is pushed, it appears in your GitHub remote repository and is available to everyone else who're working with the same repository.

Modifying a file and pushing to remote repository

You can also use wildcards instead of a period. For example, if you wanted to add all text files you could type *.txt instead of a single period to only add text files.

If you're working with a lot of other people, we'd recommend you pull (explained below) before committing. If your local repository is not the same as the remote repository (excluding your new changes), the commit fails. For example, if someone has added new files to the remote repository while you've been working and you try commit, it fails until you pull.

Pulling or fetching updates from the remote repository

How to deal with a Git merge conflict

When multiple people are working with the same files, you're going to encounter merge conflicts. When a conflict occurs, Git modifies your local files and it is up to you to manually fix the files with the conflicts.

Use the git status command to see the status and merge conflict information.

Open the file with the conflict to start correcting the errors. In the example file below, we had a text file with one line of text and in the local repository we added the text "update1" to the file. However, during the same time, the remote repository file was modified and added "update2" to the file on the same line. Git marks conflicts with "<<<<<<< HEAD" for lines in the current branch and everything after "=======" as the remote changes followed by ">>>>>>> < hash >" to mark the end.

To resolve this merge conflict, we would need to decide what text we wanted to keep, update, or remove. In this example, we want to keep "update1" and "update2" in the order they're listed so we would only need to remove the Git markings to make the file resemble the following example.

If you're working with a big file, it's a good idea to search the file for "HEAD" because there may be more than one conflict.

Once the changes are made in the file, we could save the file and then perform the following git commands to update the fixes.

The example given in this merge conflict is a basic example. When dealing with a file with more than a few lines of text or big sections of code, merge conflict can get a lot more confusing. To make it easier to deal with merge conflicts, you can use the command git mergetool to use a merge tool, such as WinMerge or another popular merge tool.

Creating a branch lets you create a duplicate of the master (trunk) and make several updates without affecting the master. For example, when developing a program if a big fix was need that could take weeks or months, a branch could be created for that fix. Once you've fixed the bug, you could merge your branch back into the master.

To create a branch in your local repository, follow the steps below.

How to merge a branch back into the master

After completing your work, you'll want to merge it back into the master or another branch by following the steps below.

How to delete a local and remote branch

If, after merging a branch you no longer want to keep the local or remote branch, you can perform the following commands.

To delete the local branch, type the following command.

To delete the remote branch, type the following command.