Alternatively called the counting frame, an abacus is a mechanical device used to assist a person in performing mathematical calculations and counting.

Who built the first abacus?

It is still unknown who invented and built the first abacus and when it was built. There is evidence of the abacus used in Mesopotamia going back as early as 2700 B.C., for use with their sexagesimal numbering system. The abacus was also used in other early civilizations, including the Chinese, Egyptian, Greek, Persian, and Roman civilizations.

Why was the abacus used?

Before computers, calculators, or even arithmetic using paper and pencil, the abacus was the most advanced device for crunching numbers. Before the abacus, the only methods people had to use for their mathematical calculations were their fingers and toes, or stones in the dirt.

Is the abacus still used today?

Why should I learn or teach the abacus?

Learning to use the abacus helps teach you a new way of counting and how to add and subtract using complementary numbers. By learning to solve problems in new ways, you can come up with better and often easier solutions to all sorts of problems.

How to use the abacus 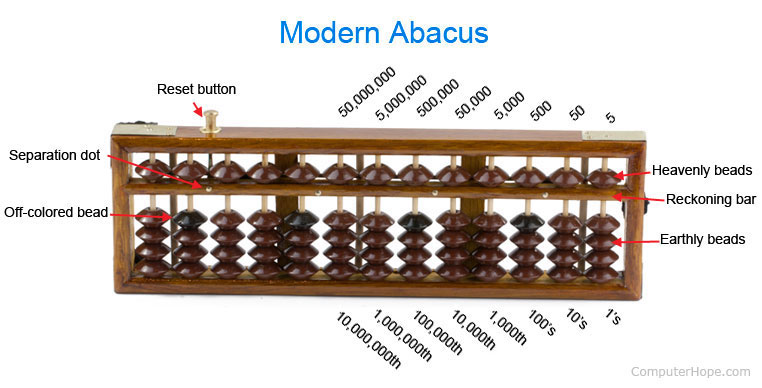 The upper beads are called the "Heavenly beads" and are worth five in the first column. The lower beads are called "Earthly beads" and are each worth one in the first column. When moving a bead towards the middle bar (reckoning bar), it's considered counted and when no bead is touching the reckoning bar that column is equal to zero. The separation dots and off-colored beads vary depending on the abacus, but are always used to separate numbers into sets of three. These markers can also mark your first position if you do not want to start counting from the far right. The beads values start in the far right 1's column, which are beads valued between 1 and 9. Going from right-to-left, the beads values increase to the 10's place, 100's place, 1,000's place, etc. 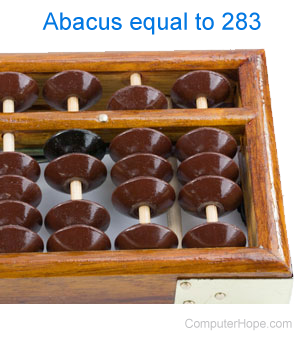 How do I add using the abacus?

What if there are not enough beads to add in a column?

How do I subtract using the abacus?

What if there are not enough beads to take away?

If there are not enough beads to take away from a column, use the complement number of what you are trying to subtract. See understanding complementary numbers for further information and examples.

Generally speaking, "complements" are any two numbers less than ten that, when summed, add up to ten. They are used in calculations involving more than one column. It is crucial to memorize the five sets of complementary numbers contained in the box below. They are essential if you want to do all forms of addition and subtraction on an abacus.

Using complementary numbers to add on the abacus

Below is a listing of the steps on how to add numbers together using an abacus. We have broken these steps into bullet points to make them easier to follow.

When adding, if the column doesn't have enough beads subtract the complementary number from the column and add one bead to the column to the left.

Many of these examples you can probably do in your head. However, following the steps using your abacus demonstrates all the required steps.

Using complementary numbers to subtract on the abacus

Below is a listing of the steps on how to subtract numbers together using an abacus. We have broken these steps into bullet points to make them easier to follow.

When subtracting, if the column doesn't have enough beads add the complementary number to the column and subtract one bead from the column to the left.