An acronym may refer to any of the following: 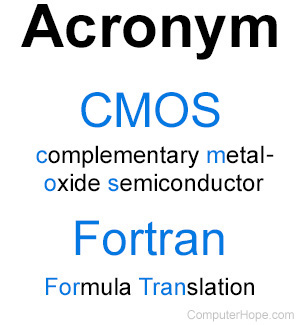 1. An acronym is the shortened version of a word or phrase that can be pronounced. For example, the acronym "CMOS" is easier to say (see-mos) and remember than its full form "complementary metal-oxide semiconductor."

How do you pronounce an acronym?

How to find the meanings of computer acronyms?

Abbreviation vs. an acronym

Both acronyms and abbreviations are shortened forms of another word, which makes it confusing when trying to make a distinction between the two. For example, "Dr." is an abbreviation of "Doctor" and both forms are pronounced the same way. An acronym is a shortened word created from the letters contained in multiple words or a phrase. For example, "RAM" is an acronym for "random access memory."

To add to the confusion, there are also acronyms where you pronounce each letter, like you would do with an abbreviation. These types of acronyms are called initialisms. For example, AKA, ATM, BRB, FAQ, FYI, and LCD are all considered an initialism. Although some may refer to these as abbreviations.

Should I capitalize an acronym?

With American English, acronyms should usually be capitalized. When an acronym becomes common or generic, it may be more common to lowercase the acronym. For example, "laser," "radar," "scuba," and "sonar" are all generic acronyms that are lowercased today. Acronyms like "bit" may be written in all uppercase or lowercase.

Some style guides (e.g., the Guardian Style Guide) suggest that only the first letter of an acronym be capitalized if the acronym is pronounced as a word. For example, "Nasa" is pronounced as Nasa (one word) and not n-a-s-a (pronouncing each letter) and therefore should not be all uppercase.

Should I capitalize each letter in the full form of an acronym?

Our computer acronym list contains the proper capitalization of hundreds of computer-related acronyms and abbreviations.

Do you use periods or spaces between letters in an acronym?

Abbreviations and acronyms should only contain the letters of the full form. For example, HTML (Hypertext Markup Language) should only be written as "HTML" and not "H.T.M.L." or "H T M L" when used.

If the acronym spells an unrelated word, periods should be used to help prevent confusion. For example, A.D. vs. AD and U.S. vs. US.

In my writing, should I use the full form or the acronym?

How you write should depend on the type of person you believe is reading your content. For example, if you believe most of your readers are new to the subject you're writing about, avoid using abbreviations and acronyms. If you need to use an acronym, when it's first introduced write the acronym followed by the full form in parentheses. For example, in the below sentence we are introducing the reader to a term they may have never encountered if they've never created a web page.

A CSS (cascading style sheet) file is used to store classes that alter the layout and appearance of a web page.

After you've introduced the meaning of an acronym one or more times, it can be used by itself in the remainder of your writing.

If you believe your readers are familiar with the subject or you're using acronyms that are considered common, they can be written without giving the full form.

The acronym component words can also be followed by the acronym in parentheses. We choose to use the acronym first because with technical writing it's more likely that the acronym will be used in place of the full form. Both methods of writing an acronym are correct and may change depending on the style guide you follow.

An acronym can be pluralized by adding a lowercase "s" to the end of the acronym (e.g., two URLs). To make an acronym possessive add an apostrophe followed by a lowercase "s" (e.g., NSA's website).

2. When writing in HTML, the <abbr> tag is used to designate an acronym or abbreviation.