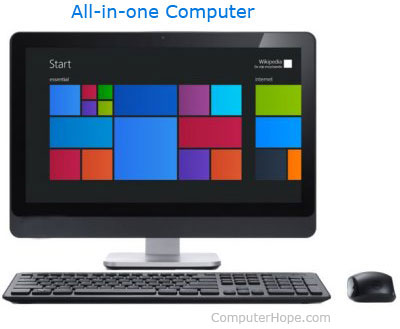 An All-in-One computer takes all the desktop computer's internal hardware components and builds them into the same case that houses the monitor. The overall effect is a smaller computer footprint and often, a cleaner appearance as there are fewer wires showing. Today, the most popular brands that manufacture All-in-One computers include Acer, Apple, ASUS, Dell, HP, and Lenovo.

All-in-One computers often have larger monitor sizes in the 21-inch to 27-inch range. They come with a keyboard and mouse but do not include a printer. They may also feature a touch screen display, like that found on many laptop computers and mobile devices.