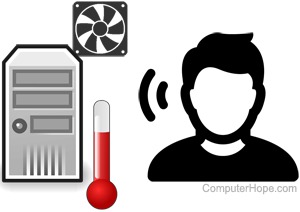 In general, the term ambient describes any conditions that can be sensed in the surroundings of a location. For example, when standing near a lake at sunset, you may hear the ambient sounds of frogs, crickets, or the lapping of water on the shore. You may also feel the ambient temperature of the air, and notice that the ambient light changes color as the sun approaches the horizon.

Below is a list of how the term ambient is used in regard to computer-related subjects.

Ambient noise or ambient sound is the amount of noise in an area or environment. For example, if you're around a computer with fans, you can probably hear a low hum, which is the ambient sound in that room. These ambient noises can be picked up by your microphone when recording and decrease the quality of your audio. 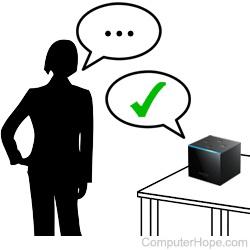 Ambient computing is a type of computing that incorporates several technologies, including artificial intelligence and machine learning, into a device or service. Unlike a traditional computer, ambient computing is invisible to the user and happens with little or no user interaction, and often uses several external resources when computing information.

For example, a smart speaker is a perfect example of basic ambient computing. With a smart speaker, the user asks the digital assistant a question that's sent to a data center, where it's processed, answered, and returned to the user. A smart speaker could also connect with other devices, like a smart thermostat (also an ambient computing device) to control the temperature in the home using the speaker. In contrast, with a computer, the user interacts with an operating system and browser to enter a question and get an answer.

Ambient computing makes things easier and often seamless for the user. However, being seamless restricts the user from knowing what's happening in the background. It also disallows them from knowing how their data is used, which leads to privacy concerns. 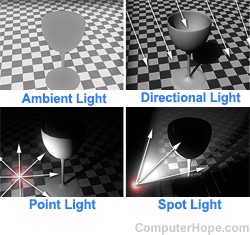 Ambient light refers to the level of light in a space before light sources are intentionally placed there. An example of ambient light is the illumination of a room by sunlight before lamps or lights are turned on.

In computer graphics, ambient light refers to the base brightness applied to textures rendered in a scene before any point, spot, or other types of virtual light sources are computed. The brightness and color of ambient light affect the appearance of the entire rendered scene.

In computer hardware, ambient light may refer to a component or modular lights that illuminate an area around the device. For more information, see ambient light. 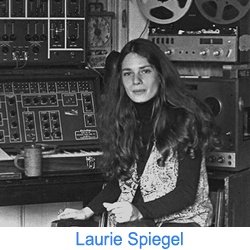 Ambient music is a genre of electronic music that sets a mood without employing musical structure such as meter or chords. Instead, generated or recorded sounds, and sometimes musical notes, are distributed over time in the recording, giving the listener a sense of place or feeling. Examples of ambient music include Brian Eno's Thursday Afternoon and Laurie Speigel's The Unquestioned Answer.