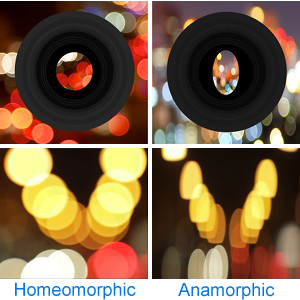 An anamorphic image is one that is captured or processed to distort the natural aspect ratio of the image information. The "squashed" image appears correct only when viewed from a certain angle, through a certain type of lens, or after being procedurally resized. Anamorphic images can be reconstructed at varying aspect ratios without noticeable loss of resolution, or create appealing photographic effects.

In motion picture and still photography, an anamorphic lens captures an image that appears stretched or compressed, until it's projected with a correspondingly anamorphic lens. The result gives a photographic effect and artifacts that are desirable to the photographer or filmmaker.

The opposite of anamorphic is homeomorphic, where the original image is recorded exactly as it would appear when projected, without intermediate distortion or resizing.