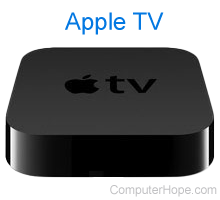 Originally called the iTV, Apple TV is a portable digital media receiver announced by Apple for the first time on September 12, 2006, and first released on January 9, 2007. In the second model of its first generation, the Apple TV acted as a storage device for a user's media that could be streamed directly to a user's HDTV (high-definition television). Users could store photos, video, or audio on the device to save space on their computer hard drives. Also, users would have a constant HDTV connection to all their media. By the Apple TV's third generation, the device had its storage capacity removed and became strictly a streaming device.

The newest generation includes streaming services, such as Hulu, Netflix, MLB.tv, iTunes, YouTube, Flickr, and others to stream to the consumer's HDTV without the need for a computer. Also, the newest generation of Apple TV can stream media to an HDTV from other iOS devices over AirPlay, which is Apple's wireless streaming medium. The Apple TV can also stream this media over AirPlay in 1080p high-definition.