APT may refer to any of the following: 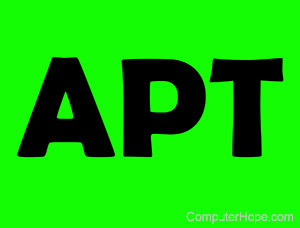 1. Initially released in August 1998, advanced packaging tool, or APT, is a software installation and removal user interface for the Debian GNU/Linux distribution and variants. APT can automate the installation and configuration of software programs.

APT was initially a front end for dpkg to handle Debian .deb packages, but later expanded to work with the RPM Package Manager as well, using APT-RPM.

2. Short for advanced persistent threat, APT is a term used to describe a group of attackers who may spend months or years attacking a target. If successful, the attackers place malicious code on one or more computers with the goal of stealing information, spying, or disrupting the target. Once infected, an APT attack can go undetected for days or months and allow the attackers to cause significant damage to the company, organization, or government. An example of an APT is Stuxnet.

These groups are often state-sponsored groups, but may also include any large group with a political or economic goal.