An array may refer to any of the following: 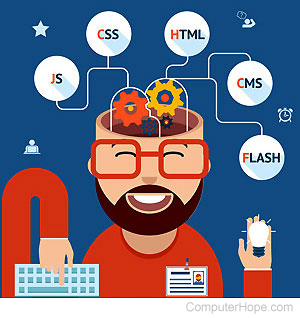 1. When referring to programming, an array is a group of related data values (called elements) that are grouped together. All the array elements must be the same data type. The examples below show how an array is defined and called in Perl and JavaScript.

In some programming languages, an array is known as a list or vector.

As you can see in the example below, our array is called "@numbers" and it contains a set of different numerical values that are spelled out.

The above Perl script prints the first two array elements using $numbers[0] (0 the first number in programming) and $number[1], followed by the "equals 3" text (result in the box below).

When you call elements from an array by their element number, that number is referred to as a subscript. Each of these element numbers is also known as an index.

The above JavaScript code prints the first two array elements using numbers[0] (0 the first value in a JavaScript array) and number[1], followed by the "equals 3" text (result in the box below).

The above JavaScript example requires an HTML element with the ID of "example", such as <p id="example"> or <div id="example">, where the text is displayed.

2. With computer drives, an array is two or more drives that are grouped together and act as one drive. For example, in a RAID array, a user may utilize multiple drives that mirror each other for redundancy to help protect the data contained on the drives.