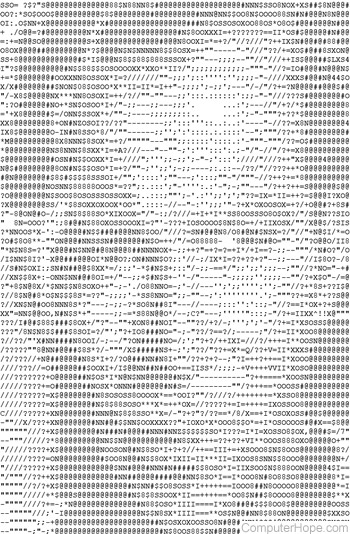 Alternatively referred to as ANSI art, text art, or word art, ASCII art is the forming pictures or art out of the characters available in the ASCII chart. These pictures were popular before the Internet and broadband when users connected through a BBS. ASCII art is still found today throughout the Internet and is still a popular form of creating a distinctive image.

The picture is an example of ASCII art, using characters to create a picture of Captain Kirk from the original Star Trek series. The letters, numbers, and punctuation marks are chosen by the artist (or algorithm) based on the shape and content of the glyph. For instance, a slash (/) could be used to create a cross-hatching effect, as in comic books.

You can also view the original file by downloading the kirk.txt file, hosted here at Computer Hope. 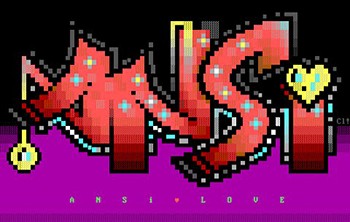 In 1986, software author Ian E. Davis released a shareware ANSI text editor, TheDraw, that increased the accessibility and popularity of the ANSI art form. TheDraw also provided a way for drawings to be animated, by making clever use of ANSI escape sequences. 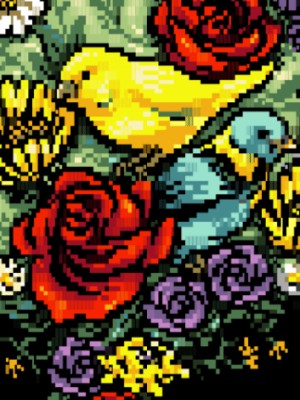 In the late 1980s and early 1990s, a competitive art scene developed where ANSI artists packaged and released their work as zipped ANSI packs. These packs served a purpose analogous to a traditional artist collecting and displaying their work in an art gallery.

In the late 1990s, consumer operating systems moved away from console user interfaces, and the World Wide Web replaced the text-based BBS as the primary form of personal networking. Coinciding with this change in technology culture, ANSI art diminished in popularity, but it remains a niche art form with a cult following.

A modern open-source ANSI and ASCII text editor, PabloDraw, is available at the PabloDraw website.