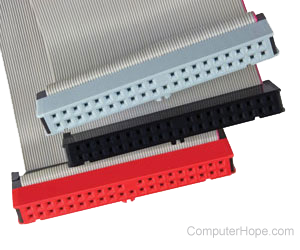 Short for Advanced Technology Attachment, ATA was approved on May 12, 1994, and is an interface that connects hard drives, CD-ROM drives, and other drives. The first ATA interface is now commonly called PATA, which is short for Parallel AT Attachment after the introduction of SATA. Today, almost all home computers use the ATA interface, including Apple computers, which use SATA.

The ATA standard is backward compatible, which means new ATA drives (excluding SATA) can be used with older ATA interfaces. Additionally, any new feature introduced is in all future releases. For example, ATA-4 has support for PIO modes 0, 1, 2, 3, and 4, even though these were first introduced in ATA-1 and ATA-2.

Below is a listing of each ATA standard to help provide a better understanding of the history behind this interface and each standards capability.

First developed by Control Data Corporation, Western Digital, and Compaq, the ATA had an 8-bit or 16-bit interface, a transfer rate up to 8.3 MBps, and PIO modes 0, 1, and 2 support. Today, ATA and ATA-1, are considered obsolete.

The ATA interfaces above on a 3.5-inch disk drive have a 40-pin connector and can support up to two drives per interface. Below is a description of each of the pins on a 40-pin ATA interface.

See the IDE (integrated drive electronics) definition for a graphical representation of the cables, ports, and connections relating to ATA.