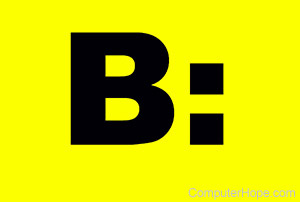 B may refer to any of the following:

1. B: is a floppy disk drive letter used on MS-DOS and Windows-based computers most associated with the 5.25-inch floppy disk drive, and sometimes the 3.5-inch floppy formats. Today, it's rare for a computer to be using a B: drive, as both floppy formats are obsolete. Also, the hard drive defaults to the C: drive. However, it is still possible to assign any drive as the B: drive.

2. In programs dealing with text like a word processor, an icon of a "B" may be shown to represent bold.

4. B is a key used with the keyboard shortcuts Alt+B, Command+B, and Ctrl+B.

6. With a regular expression, \b is word boundary in most languages or a backspace. When capitalized, \B is a non word boundary.

7. With Microsoft Excel and other spreadsheet programs, "B" is the second column of a spreadsheet. To reference the first cell in the column, you'd use "B1."

8. In the phonetic alphabet, "B" is often pronounced as "bravo."

9. B is the second letter of the English alphabet. The letter "B" comes after "A" and is followed by the letter "C." To create a capitalized "B" press the Shift and B key at the same time.

On a U.S. QWERTY keyboard, the "B" key is on the bottom row, to the right of "V" and left of the "N" key. See our keyboard page for a visual example of all keyboard keys.

If the "B" key is not working on the keyboard, see: Some of the keys on my computer keyboard aren't working.