A backbone is the portion of a computer network that carries most traffic on the network at high speeds. The backbone often connects large networks or companies together. The first Internet backbone was between UCLA and SLI on October 29, 1969, and today the Internet consists of several large backbones that carry most traffic throughout the world. In the United States, many of these backbones are run by telecommunication companies such as AT&T, Bell South, Congent, Qwest, Level 3, MCI/Worldcom, Sprint, and Time Warner. 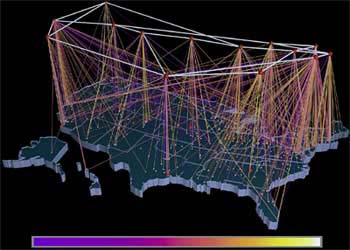 The image above, created by Donna Cox and Robert Patterson of the NCSA, is a visual representation of an Internet backbone in the United States. This picture is of the NSFNET T1 backbone and the volume of traffic going over that network backbone for the month of September 1991. The color purple represents zero bytes of data, and the white represents 100 billion bytes of data.

Without a network backbone, you would need to pass through dozens or even hundreds of different computer's and routers to access the computer storing what you need. If a network backbone goes down your Internet connection speed can be drastically reduced or may not even be able to get to certain places in the world.