BD may refer to any of the following: 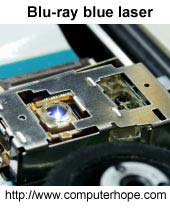 Blu-ray was introduced at CES on January 4, 2006, can store 25 GB on a single-layer disc (50 GB on a dual-layer disc) and are the same size as a CD. The picture shows a blue laser in a Blu-ray disc player.

On February 19, 2008, Blu-ray beat out HD DVD in the high-definition disc format wars.

What did the Blu-ray replace?

The Blu-ray discs and drives are an upgrade and replacement to the CDs and DVDs and drives.

Can a Blu-ray player read a DVD and CD?

Yes. A Blu-ray player is backward compatible and can read Blu-ray discs, DVDs, and CDs.

Can a DVD player read a Blu-ray disc?

No. Blu-ray is the newer, more advanced technology; a DVD player cannot read a Blu-ray disc.

Why is it called a Blu-ray?

The name Blu-ray comes from the blue-violet color of the laser that is used in the drive to read discs. This laser was unique to all prior disc drives because it used a blue laser instead of a red laser.

BD+ (BD Plus) is a copy protection system for Blu-ray that allows the movie studio to create a custom method of protecting Blu-ray movies.

2. BD is also chat slang for a big deal.