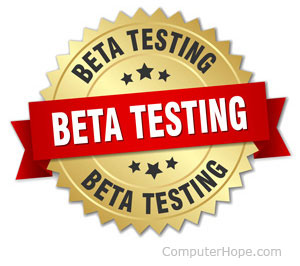 A beta is any software still under development that's made available during a software release life cycle to a select few to test, examine, and report problems. Beta testing allows developers to find problems they may have missed and fix them before the program is released.

Software in this stage of development may be referred to as betaware.

How to be a beta tester

Many games (especially online games) in the final stages development have an open beta for several months that allows anyone interested in the game to play and report problems. To become a beta tester for any program or game requires either registration or sometimes only a download of the program from the companies website.

Participating in a beta is always free and should never be purchased. Many scam artists sell copies of a beta program or the activation code to unsuspecting people wanting to play a game before any of their friends. Many times these codes are fake or disabled codes to play the game.


Why is it called beta?

Beta is the second letter of the Greek alphabet (after alpha).