Binary may refer to any of the following: 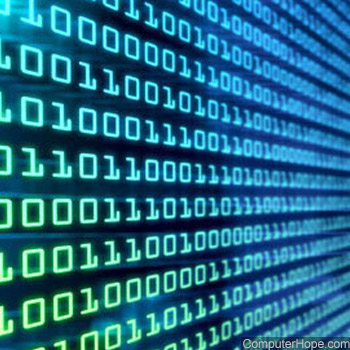 1. Binary is a base-2 number system invented by Gottfried Leibniz that's made up of only two numbers or digits: 0 (zero) and 1 (one). This numbering system is the basis for all binary code, which is used to write digital data such as the computer processor instructions used every day.

How does binary work?

The 0s and 1s in binary represent OFF or ON, respectively. In a transistor, a "0" represents no flow of electricity, and "1" represents electricity being allowed to flow. In this way, numbers are represented physically inside the computing device, permitting calculations. This concept is further explained in our section on how to read binary numbers.

Why do computers use binary?

Binary is still the primary language for computers and used with electronics and computer hardware for the following reasons.

How to read binary numbers

The following chart illustrates the binary number 01101000. Each column represents the number two raised to an exponent, with that exponent's value increasing by one as you move through each of the eight positions. To get the total of this example, read the chart from right to left and add each column's value to the previous column: (8+32+64) = 104. As you can see, we do not count the bits with a 0 because they're "turned off."

How to add in binary

What are a left shift and right shift?

A right shift is like a left shift, except the bits are shifted to the right to divide the number by two. For example, the binary number "00001010" equals ten, and when right shifted, it becomes "00000101" or five.

The image is an example of some binary humor (joke) via a famous saying on many geek t-shirts. Those who can read binary realize this quote actually says, "There are only two types of people in the world: Those who understand binary and those who don't." In the binary system, 10 is two, not number ten.

The following tool converts any text into binary.

2. While in an FTP session, binary is a command that switches the file transfer mode to binary. For information about binary and other FTP commands, see: How do I use FTP from a command line?

3. When used as a noun, the term "binary" may refer to an executable file. For example, "locate the binary named program.exe, and double-click it."