A black hat may refer to any of the following: 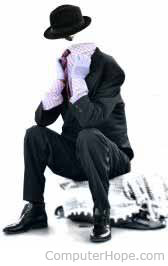 1. A black hat describes a deceptive user, computer hacker, or an individual who attempts to break into a computer system or computer network. Their intent is often to steal, destroy, or otherwise modify data on that computer system without permission.

3. When referring to SEO, black hat SEO is tactics or deception that disobey's Google Webmaster Guidelines in the hope of getting more traffic to a web page. When detected, Google will penalize a website causing it to either not be listed or ranked lower than other results. The opposite of a black hat SEO is a white hat SEO.