Boot may refer to any of the following:

1. Alternatively called boot up or sometimes start up, booting is the process of powering on a computer and getting into the operating system.

If the computer is in working condition, it boots automatically after turning on the computer. If problems exist that prevent the computer from booting, an error message is often shown.

If the computer cannot turn on or has a black screen, it cannot boot. Resolve the power problem before attempting to boot.

What happens when a computer is booting?

During the boot process, the computer goes through multiple steps to ensure the computer hardware works correctly and the necessary software can be loaded. When booting, the computer performs the following tasks.

When the computer is booting, you may see a boot screen similar to the example picture below. 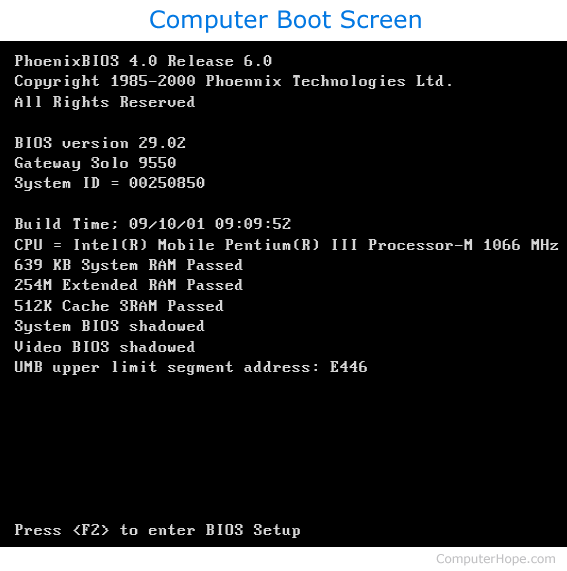 In the example above, the screen shows the BIOS information, the type of computer, CPU, and memory, and a prompt to enter the BIOS setup.

If the computer cannot boot, you may receive a boot failure error. This error indicates the computer is not passing POST or a device in the computer, such as the hard drive or memory, has failed. You may also hear a beep code to help you identify which hardware is failing during the POST.

2. See the kick definition for additional information about what it means to get boot or booted from chat.