The term broadcast may refer to any of the following:

1. In general, to broadcast information is to transmit it to many receivers. For example, a radio station broadcasts a signal to many listeners, and digital TV subscribers receive a signal that is broadcast by their TV provider.

2. In computer networking, broadcasting is sending data packets to multiple recipients all at once. For instance, a local area network can be configured so that any device on the network can broadcast a message to all the others. 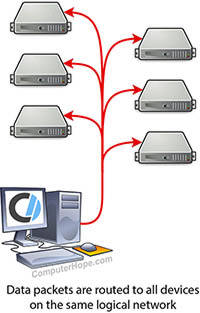 When a networked device wants to broadcast, it transmits a data packet to the network's broadcast address. The network hardware, such as routers or switches, does the work of sending the packet to every other device in the group. The group of eligible devices is called a broadcast domain.

This type of communication is also called all-to-all, because every device can transmit a message simultaneously to every other device.

Broadcast networking is supported by IPv4, the network protocol used by most of today's Internet. However, the newer IPv6 protocol deprecates broadcasting in favor of multicasting.

Broadcasting is one of the five major techniques for routing computer network traffic. The others are unicast, multicast, anycast, and geocast. 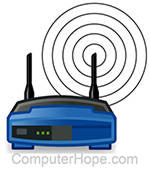 Wi-Fi hardware can be configured not to broadcast an SSID. In this case, the Wi-Fi network is called a hidden network. Wireless devices can still connect to a hidden network if the user manually enters the network name.