A brute-force attack may refer to any of the following: 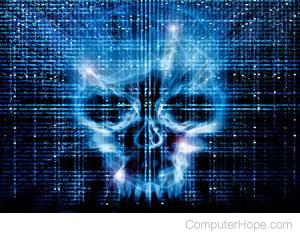 1. A password and cryptography attack that does not attempt to decrypt any information, but instead tries a list of different passwords, words, or letters. For example, a simple brute-force attack may have a dictionary of all words or commonly used passwords and cycle through those words until it accesses the account. A more complex brute-force attack involves trying every key combination until the correct password is found. Due to the number of possible combinations of letters, numbers, and symbols, a brute-force attack can take a long time to complete. The higher the type of encryption used (64-bit, 128-bit, or 256-bit), the longer it can take.

Although a brute-force attack can access an account eventually, these attacks can take several hours, days, months, or years to run. The time required to complete an attack depends on the password strength, type of encryption, power of the attacking computer, and knowledge of the target system.

To help prevent dictionary brute-force attacks, many systems only allow users to make a mistake by entering their username or password three or four times. If the user exceeds these attempts, the system either locks them out of the system or prevents future attempts for a set amount of time.

2. Brute Force was a game originally developed and released for the PC in 2000 and later released for the Xbox gaming console in 2003 by Microsoft Game Studios. Brute Force was a third-person shooter with multiple characters, each with its own strengths and capabilities. The game was set in 2340, and the object was to find other characters loyal to the confederation. These other characters became part of the Brute Force team, which fought against aliens, outcasts, and mercenaries. From day one, the game was popular, breaking several Xbox sales records and beating out sales of the game Halo.