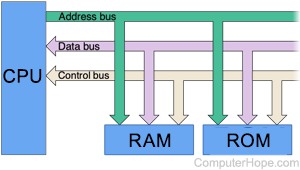 Alternatively known as an address bus, data bus, or local bus, a bus is a connection between components or devices connected to a computer. For example, a bus carries data between a CPU and the system memory via the motherboard.

Why is a computer bus called a bus?

A computer bus maintains a strict schedule, "picking up" data and "dropping it off" at a regular interval. For example, if a bus operates at a frequency of 200 MHz, it completes 200 million data transfers per second. This speed is referred to as the bus width.

Bus is not an abbreviation or acronym.

The illustration below shows the different types of computer buses and how they connect devices on the motherboard. 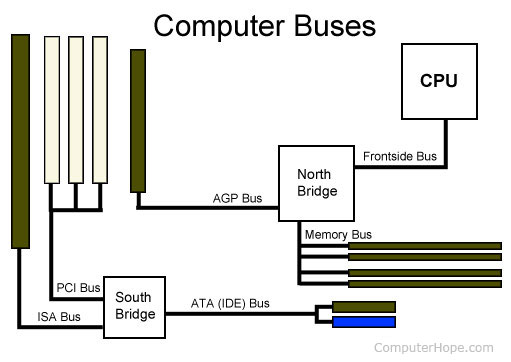 A bus is either a parallel or serial bus, and either an internal bus (local bus) or an external bus (expansion bus).

A computer bus can transmit its data using either a parallel or serial method of communication. With a parallel bus, data is transmitted several bits at a time. However, with a serial bus, the data is transferred one bit at a time.

With computer memory, a computer address bus is the bus containing the memory location (memory address) of where data is located in the computer memory. Once the computer understands where to get the information, the data bus is used to transfer that data.

Today, many of the buses listed above are no longer used or are not as common. Below is a listing of the most common buses and how they are used with a computer.