A button may refer to any of the following:

1. When referring to hardware, a button is a physical switch that controls a device's function. The picture is an example of the power button found on the front of a computer.

What does the power button do?

For information about how computers work, see: How does a computer work?

What is the power button symbol? 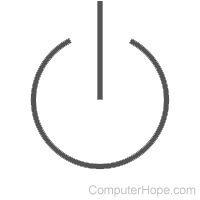 Where is the power button located?

The "buttons" on a keyboard are referred to as keys, not buttons. For example, Ctrl is called the "Ctrl key" and not the "Ctrl button."

What are the mouse buttons?

Today, all computer mice have multiple, clickable buttons to perform certain actions. See our mouse button page for further information about these buttons.

How many buttons does a computer have?

Today, most computers only have one or two buttons: the power button and sometimes a reboot button. Some other buttons found on earlier and specialty computers can be any or all of the following.

2. With software, a button is a graphic icon that may have text that performs a software function. For example, the Windows Start button is used to open the Start menu. See the push-button dictionary definition for further information and an example.

3. When writing in HTML, the <button> tag is used to create a clickable button.