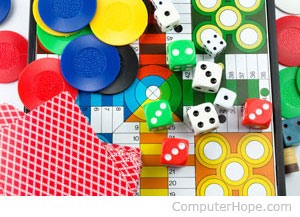 The term casual gaming refers to video games which do not require a major time investment to play, win, and enjoy. A casual gamer is a player who enjoys any video game without investing significant time to it, playing it spontaneously, irregularly, or infrequently.

The term casual may also be a derogative noun. Describing a player who is not fully committed to playing a video game at a high level. For example, a hardcore gamer may disregard the opinions of someone who doesn't often play the game by calling him or her a "filthy casual."

Casual video games have several distinguishing features. They are often web-based and are usually found on either mobile phones or personal computers. They usually do not have a high learning curve. To achieve this, most casual games have few controls--normally a single button or two that will predominantly control the majority of the game. Casual games usually do not require a significant amount of time to play. They can normally be played in small periods of time. Unlike more "hardcore" games, casual games usually do not require a long time to reach the final stage of the game. Therefore, a casual game often does not contain a save feature.

Microsoft's Solitaire is considered to be the first highly successful casual game on the personal computer and since its release in 1990, has drawn approximately 400 million gamers.