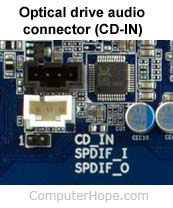 For example, CD-IN could connect the four-pin cable on the back of a CD-ROM drive to the corresponding audio connection on the motherboard, permitting direct playing of CD audio.