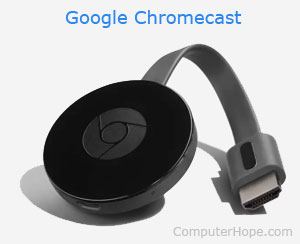 Chromecast is an HDMI dongle sold by Google that allows users to broadcast the screen of another device to a television set. It was released on July 24, 2013.

The Chromecast is unique from similar products because it's only $30 and can stream any Chrome browser tab, which means you can watch anything you can open in your browser.