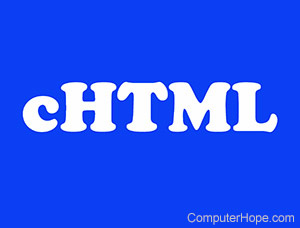 Short for compact HTML, cHTML is a subset of HTML used for small devices such as smartphones and PDAs. Some HTML features, such as tables, image maps, font styles/variations, background colors, background images, frames, and style sheets are not supported in cHTML. On cHTML devices, basic operations are performed by a combination of four buttons rather than cursor movement, which is one reason why some features (like image maps) are not supported.