A class may refer to any of the following: 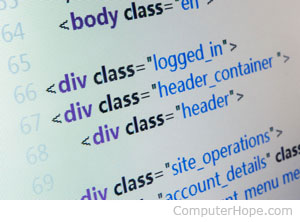 2. With CSS, a class is a selector used to specify a style on an HTML element. For example, the below class called center could be created to center text on a paragraph of text.

The CSS code above shows that classes are denoted by putting a period in front of the name. A line that does not begin with a period is considered an HTML tag selector and an id selector begins with a #.

Never start a CSS class with a number since not all browsers support class names beginning with numbers.

3. With an IP address, a class is a section or group of IP addresses. See our IP definition for a listing of each of the IP classes.

4. In a game, a class is a character based on abilities. For example, a warrior and mage are both examples of game classes. A warrior is often strong can withstand a lot of damage, but does not deal much. A mage is the opposite.