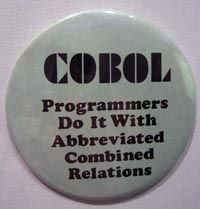 Short for Common Business Oriented Language, COBOL was first appeared in 1959 as Grace Hopper, Bob Bemer, and others began their work in its development. COBOL is the second oldest high-level programming language (FORTRAN being the oldest) and is still in use by many businesses and governments.