A comma is a punctuation mark ( , ) found on the same keyboard key as the less than ( < ) key on United States keyboards.

Where is the comma on the keyboard?

Below is an overview of a computer keyboard with the , (comma) key highlighted in blue.

How to create a comma 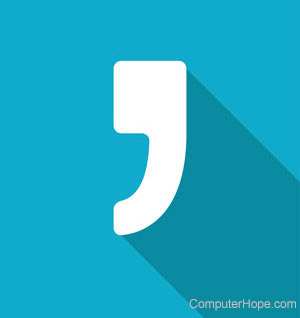 Creating the "," symbol on a U.S. keyboard

On English PC and Mac keyboards, the comma is on the same key as the less than symbol. Pressing the , key with no other key creates the comma symbol.

Create a "," symbol on a smartphone or tablet

To create a comma on a smartphone or tablet, open the keyboard and go into the numbers (123) or symbols (sym) section, and then tap the ',' symbol.

What is a comma used for on a computer?

The comma is used in programming as an operator to separate values or elements. For example, in Perl, you could declare multiple variables in one line by separating each of the variables with a comma, as shown below.

A comma in the date

A comma in a CSV

A CSV is short for comma-separated value and describes a type of file storing data that's separated by commas. See our CSV page for further information and help.

What comes after a comma?

When typing a sentence that uses a comma, a space follows a comma. However, if that comma is in a number, as shown above, it may be followed by a number.

What is the other symbol on the comma key?

On U.S. keyboards, the , key is shared with the < (less than) key, which may be shown next to or above the comma symbol. To create the less than symbol, hold down the Shift key while also pressing the , key.