A component may refer to any of the following: 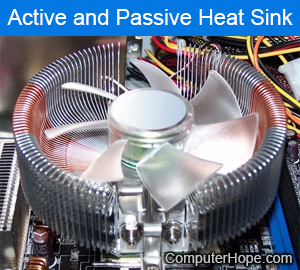 Components in a computer

Below is a list of internal components of a computer chassis (case). Clicking any of the links below gives you further information and pictures.

An external component is most often referred to as a peripheral.

Components in a server

Most servers have many of the same components found in a computer. However, servers are designed to run resource-intensive applications and handle the multiple users that log in and run those applications. For those purposes, servers often have multiple CPUs, higher quantities of RAM, and larger storage capacities. The most common components installed on a server are listed below.

What is the most important component of a computer?

See our computer term page for a full explanation of a computer with the main components that make up a computer.

How many components does a computer have?

This question varies depending on the type of computer and if you want to count the components that make up a component. For example, with a typical desktop computer, you could say the computer has five components:

This assumes that the motherboard has an integrated network card, sound card, and video card. If any of these cards were expansion cards, they'd be considered an additional component. Also, this number does not consider any fans or heat sinks as a component. Finally, if you consider each of the smaller components required to make a component work, like a motherboard (e.g., ICs, capacitors, etc.), a computer has many more components.

2. With software, a component is a segment of code designed to be executed as part of a larger program.