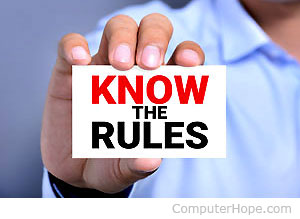 For example, consider the following textual example of a conditional statement.

The example above is how a conditional statement might be interpreted by the human brain. In this example, if the value is true, it performs the action. If it is false, it does nothing.

Using a computer programming language, the conditional statement above could be written like the example statements below.

To make the program do something when a condition is not true an else statement can be added, as shown below.

Next, we could add even more conditions by adding an elsif (else if) statement, as shown below.

Finally, this last example prints one of three messages to the screen, depending on if the value is greater than 10, less than 10, or equal to 10.

Boolean, Condition, Else, Else if, Expression, If else, If statement, Operator, Programming terms, Statement