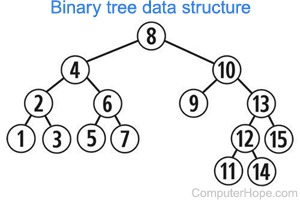 The decision of what data structures to use and how they're used is one of the most important steps in designing and writing a computer program.

The following are primitive data structures, also known as data types. Each of the following primitives can hold a single value, such as 1, 3.14, or the lowercase letter a.

Each of the following compound structures has its own benefits and use cases.

A linear data structure is a compound data structure whose elements are arranged in a logical sequence. In these structures, every element is followed by exactly one other element, unless it is the last one.

A tree is a compound structure whose elements are arranged in a parent-child hierarchy, similar to branches on a tree. The elements are referred to as nodes. A tree contains a single root node, which has no parents. Traversal usually occurs only in one direction, from the node to one of its children (called "descendents"). Then, traversal continues recursively, to one of the children of that node, until the desired node is reached. If a node has no children, it is called a leaf node.

If a tree is balanced, all of its branches are same "depth" — all leaf nodes are the same distance from the root node. If a tree is unbalanced, there's no restriction of how long a branch can be in relation to the others. Unbalanced trees are simpler to implement, but may be less efficient in worst-case scenarios.

In computer science, a hash function is a function that produces a fixed-length number, often represented in hexadecimal, that can be calculated from a given set of input data. Regardless of the input size, as long as the input has not changed, it always produces the same fixed-length hexadecimal number. These types of functions have important uses in computer science, because they can validate or index data, even at a massive scale.

The following are examples of data structures designed to store the results of hash functions, many being special cases of structures described in the sections above.

A graph is a data structure that organizes data according to the relationships of its elements in a geometric space. The elements are usually vertices (points in the graph) and edges (the connections between vertices).

The following are examples of data structures used to efficiently store and process graphs.