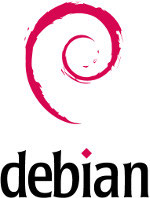 Debian is a free, open-source operating system developed with tools from the GNU project. It runs using either the Linux or the FreeBSD kernel, and officially supports ten different architectures, including Intel and AMD 32-bit and 64-bit systems.

Debian includes many popular free software titles by default, such as LibreOffice, Iceweasel (a variant of Firefox), and Evolution mail. It allows users to choose a desktop environment from several popular choices, including GNOME, KDE, Xfce, and LXDE.

Debian Live is a version of Debian specifically designed to boot from removable media such as a CD-ROM or USB flash drive allowing Debian to run without modifying the hard disk. Debian offers the option to install it onto the hard disk at a later time, if needed.

Debian uses the apt and dpkg tools for software package and dependency management to install software from Debian's free online repository of over 37,000 pre-compiled software packages.