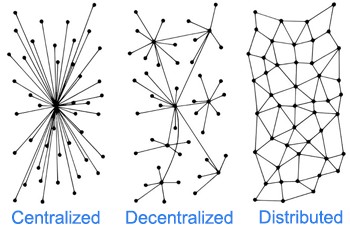 For businesses and organizations, the benefits of a decentralized system include failure tolerance and redundancy, at the cost of additional management complexity. In any information technology organization, decentralization must be balanced with centralization when designing a networked system, to optimize this cost-benefit balance.

Decentralized systems have gained widespread attention with the advent of blockchain technologies, such as those used in Bitcoin and other cryptocurrencies. These systems leverage the properties of cryptography and Markov chains to provide consensus about the financial transactions that occur in the system. The result is a verifiable distributed ledger of transactions, removing the need for a centralized banking authority. Note that although the ledger is distributed to all cryptocurrency users, the cryptocurrency system itself is decentralized.