Delete may refer to any of the following: 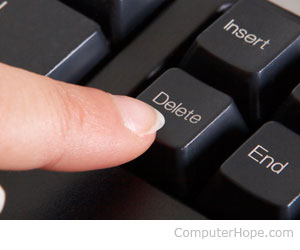 1. In general, delete or remove refers to the act of eliminating a file, text, or another object from the computer hard drive or other media. For example, if you had a picture on the computer you no longer wanted, it could be deleted.

What happens when you delete?

What is the difference between deleting and uninstalling?

When a program is installed on a computer, several files are copied to a computer and often in multiple locations. Some programs may also make changes to system files like the registry. When a program is uninstalled, all files are removed, and any system changes are removed or reverted to the default settings. When you delete a file, you're deleting one or more files in one location. A program could be removed by deleting its folder, but if files were copied elsewhere during the install, those files become orphan files, and any system file changes remain on the computer. Further information about uninstalling is on our uninstall page.

2. Del is both a common abbreviation for delete and a key on a computer keyboard. It is sometimes used in combination with other keys to perform certain actions on a computer, also known as shortcut keys. For example, Ctrl+Alt+Del indicates pressing the Ctrl, Alt, and Del keys at the same time. The picture is an example of the delete key found on an Apple computer.

With some keyboards, the delete key may be labeled as a clear key.

Where is the Del or Delete key on the keyboard?

Pictured below is a keyboard with the Delete keys highlighted in blue on the main keyboard and the numeric keypad.

Click in the middle of the text in the below box and press the Del key to practice using the key.

Press and hold down Ctrl and press Del to delete one full word at a time, instead of deleting one character at a time.

How many delete keys are on the keyboard?

Where is the delete key on a Chromebook?

There is no delete key on Chromebooks. However, if you need the functionality of a delete key, you can press the keyboard shortcut Alt+Backspace to delete on a Chromebook.

Does the delete key remove text from the left or right of the cursor?

What happens if you hold down the delete key?

Holding down the delete key deletes text until there's no more text to the right or below the cursor or you let go of the key.

People often hold down the delete key to delete a lot of text. However, it's faster to select all the text and then press the delete key once. For further information about selecting text, see: How to highlight or select text.

3. Delete is a command line command that removes data or files. Below is a list of different methods for deleting a file or directory from a command line.

4. When writing HTML, the <del> tag indicates that a block of text was deleted from a web page. In some cases, the <ins> tag would then be used to indicate the new text being added in place of the deleted text.