A desktop may refer to any of the following:

1. A desktop is a term commonly used to describe a desktop computer or system unit. 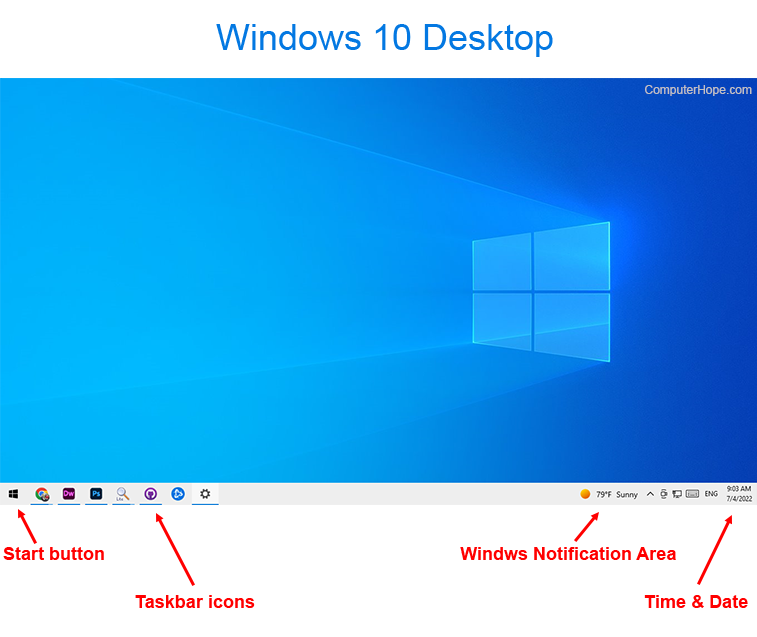 In this example, there are no icons on the desktop, and the wallpaper is a blue screen with the Windows 7 logo. Also, the taskbar is at the bottom of the desktop and contains the Start, taskbar icons, Windows Notification Area, and the time and date.

If you're more familiar with a smartphone or tablet, you can think of the desktop as the home screen.

You can get to the Windows desktop at any time by pressing the Windows key and D at the same time or using Aero Peek.

What icons and items are found on the Windows desktop?

Some of the most common icons on the desktop include those for My Computer, Recycle Bin, your Internet browser (e.g., Internet Explorer), and My Documents. On the Windows desktop, you can find the Windows Start menu through the Start on the taskbar, and the Windows Notification Area.

If some or all of these icons are missing on the desktop, you can change which icons are displayed. Click the link below and follow the steps to show, or hide, these icons.

Should I capitalize the word "desktop" in my writing?

Unless at the beginning of a sentence, "desktop" should be written as all lowercase when referring to part of a GUI operating system.

Other words that contain the word desktop, such as "Active Desktop" and "Remote Desktop" are capitalized. Settings and options may also capitalize desktop in their description.

3. With software, a desktop is a Graphical User Interface metaphor in a desktop environment for the interaction between the user and the operating system.

4. Desktops is a Windows Sysinternals utility that allows users to manage applications on up to four virtual desktops, all accessible using the tray icon interface.