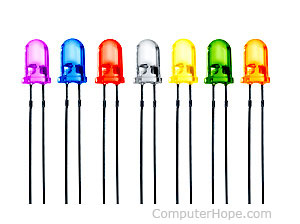 A diode is a semiconductor device that allows electrical current to flow in only one direction. A common example is the LED (light emitting diode) used to backlight various flat-panel displays. Diodes have numerous uses including signal limiters, voltage regulators, rectifiers, switches, modulators, and many more.

The device itself was first invented by John Fleming, but he called it the oscillation valve. The name "diode" was later coined by William Eccles. A zener diode is used in circuits where the voltage is high enough to break down the physical construct of a normal diode.