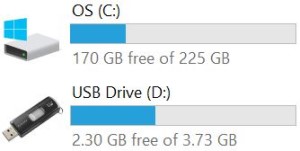 Alternatively referred to as disk space, disk storage, or storage capacity, disk capacity is the maximum amount of data a disc, disk, or drive is capable holding. Disk capacity is displayed in MB (megabytes), GB (gigabytes), or TB (terabytes). All types of media capable of storing information have a disk capacity, including a CD, DVD, floppy disk, hard drive, memory stick/card, and USB thumb drive.

As information is saved to a disk, the disk usage is increased. However, the disk capacity always remains the same. For example, a 200 GB hard drive with 150 GB of installed programs has 50 GB of free space but still has a total capacity of 200 GB. When a device reaches its capacity, it cannot hold any more information.

After formatting a drive, some of its capacity may appear to be missing. The reason for this is can be how it was formatted, how it's being used, and the operating system measurement standard.

The images below show the total disk capacity of a hard drive, how much space is being used, and what's available. In the first picture, the Capacity (115 GB) is shown under the Free space. In the second picture, the used space and capacity is shown on the same line. For example, the Primary Drive (C:) has a disk capacity of 232 GB, with 39.1 GB free.

A hard drive can be partitioned into sections that give the appearance of a new drive. When a drive is partitioned, its overall disk capacity remains the same. However, because the partitions are treated as new drives, each partition has a different capacity.