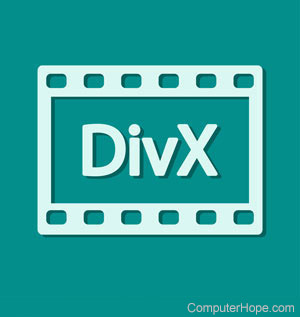 Divx may refer to any of the following:

1. DivX is a lossy video compression scheme. It can create compressed files one-eighth to one-twelfth the size of the uncompressed digital video, with negligible quality loss.

2. Short for digital video express, DIVX was a DVD-ROM format developed and promoted by several large companies including Disney, Dreamworks SKG, Paramount, and Universal. The idea behind DIVX is to help add copy protection security. With DIVX, a movie or other media is loaded onto a disc and only playable for a duration of time, often two days. Each DIVX player connects over the telephone to allow communication between the player and a central server, allowing it to exchange billing information.

The DIVX player is more expensive than a traditional DVD drive, and current DVD drives do not support DIVX. Therefore, a new player must be purchased to play a DIVX disc. DIVX discs were exclusively available through Circuit City retail outlets until June 16, 1999, when the format was discontinued. Registered DIVX customers were able to continue viewing discs for an additional two years, until 2001, when all DIVX service was terminated.