Adobe Dreamweaver is a software program for designing web pages, essentially a more fully featured HTML web and programming editor. The program provides a WYSIWYG (what you see is what you get) interface to create and edit web pages. Dreamweaver supports many markup languages, including HTML, XML, CSS, and JavaScript. As for human languages, it supports English, Spanish, French, German, Japanese, Chinese (both simplified and traditional), Italian, Russian, and many more.

Dreamweaver was originally developed and published by Macromedia in 1997. Adobe purchased Macromedia (which included the rights to Dreamweaver) in 2005 and continued the development of the program. The many features of Dreamweaver make it a versatile web editing tool, where it be for creating complex or very simples sites. 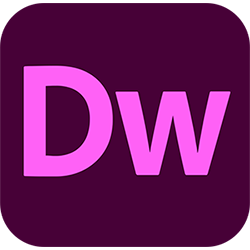