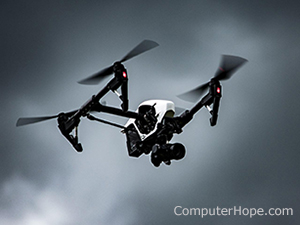 Also known as a UAV (unmanned aerial vehicle), a drone is a flying device that is controlled remotely by a user. Drones fly using multiple propellers mounted on arms that extend from the center. Most drones have cameras mounted on them to capture photos or record videos from the air. Drones can be piloted via a proprietary controller or a smartphone app.

Today, drones are commonly used for the following tasks:

As a drone is technically any unmanned aerial vehicle, the very first use of a drone was in 1839. Austrians used unmanned balloons to attack Venice with explosives. Unfortunately, the Austrians relied on wind to carry the balloons to Venice, and in some cases, the wind blew the balloons back towards the Austrian lines and ended up bombing themselves.

Drones as we know them today, the small remotely controlled drones, began to see increasing use starting in 2006. Because of the increased usage, the FAA (Federal Aviation Administration) began issuing commercial drone permits for drone use in 2006, as well.

Popularity of drones grew rapidly beginning in 2013, when Amazon.com announced they were looking into the ability to use drones for delivering packages to their customers.

How to control drones with a computer or smartphone 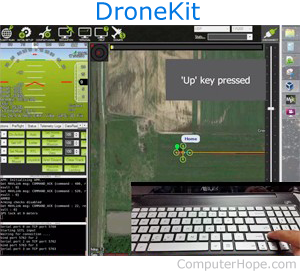 UAVs can be controlled with a computer to achieve autonomous flight, or pre-programmed flight plans. The computer may also be used as a remote control ground station. Some apps can control UAV flight, and turn a smartphone into a drone with special hardware.

Below are examples of apps, open-source software, and communities that support programmable and computer-controlled UAV flight.