A dark overlay covering a section of text or a graphic that makes the object appear three-dimensional. In operating systems and software programs, drop shadows can make interface elements easier to see.

For example, a dialog box may appear in front of the other elements in a window. The drop shadow makes the box appear to "float above" the rest of the window, to prevent confusion with the contents of the window behind.

In the image below, the text "Computer Hope" has a drop shadow. 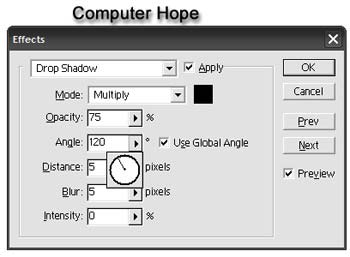 In the example above, we're creating a drop shadow on the "Computer Hope" layer effect in Adobe Photoshop. As shown in the Effects dialog box, we have different ways to adjust the appearance of the drop shadow. For example, the opacity, angle of the shadow, distance of the shadow, and how blurry the shadow appears.